Africa may be known as a mobile money hotspot but that was not Serge Boupda’s experience whenever he returned home to Cameroon. Instead, he found that merchants preferred to be paid with old style-cash. So he moved home and founded a fintech startup in an attempt to change behaviours. He may be succeeding.

Serge Boupda was getting tired of having to fork out odd amounts of cash every time he bought anything in his hometown of Douala. After studying and then working abroad for more than 15 years, he returned to Douala often to visit family. Each time he did so, however, the old irritation crept in … why were vendors still using cash?

Then, he stopped wondering and started doing. He moved home and founded Diool, a fintech startup. The company recently attracted a multimillion-dollar investment.

“(The) Diool idea simply came from the frustrating experience of not being able to purchase an item with anything other than cash when I was in Cameroon,” Boupda explained in an interview with bird.

“In Europe, where I was living, there are so many means of payment – credit cards, cheques, etc. – that one can use. I rarely had an occasion to pay with cash. But here, things were quite different. Only cash payments were accepted. When you don’t have enough cash and you want to buy something, you cannot use your credit card or anything similar, you have to go to a bank to withdraw some money, which is very frustrating.”

He found that the reason merchants preferred cash was technical, rather than due to any societal resistance to innovation.

“We discovered that as simple as it seems to the average mobile money user, the management of cash flows may turn out to be a real headache for the seller when payments take place simultaneously on different digital payment services,” Boupda said.

“The reconciliation of a great number of payments issued through a variety of mobile money services, as well as other cash sources like banknotes and coins, cheques, and other kinds of tools, is a very complex and time-consuming process, while the risk of making mistakes when reporting figures is very high,” he explained further.

And that was how the concept of a solution integrating those multiple services into a unique or single platform was born.

“Diool is a digital platform whose aim is to allow merchants to pay their suppliers or to be paid by their customers whatever the means of payment used by the latter,” Boupda said.

The most exciting part of this venture is not the marketing of a new product, but the challenge of sparking behavioural change simply by ensuring that merchants know there is an opportunity to shift out of their old habits, according to Boupda.

The start-up’s founder and CEO said the mission he had set himself would have been far more difficult if the solution had simply been imposed using a design from elsewhere. Avoiding that sort of patronising thinking allowed him to design differently, for a specific situation. That is a crucial element, he believes, when engaging with merchants who are particularly conservative in their work procedures. 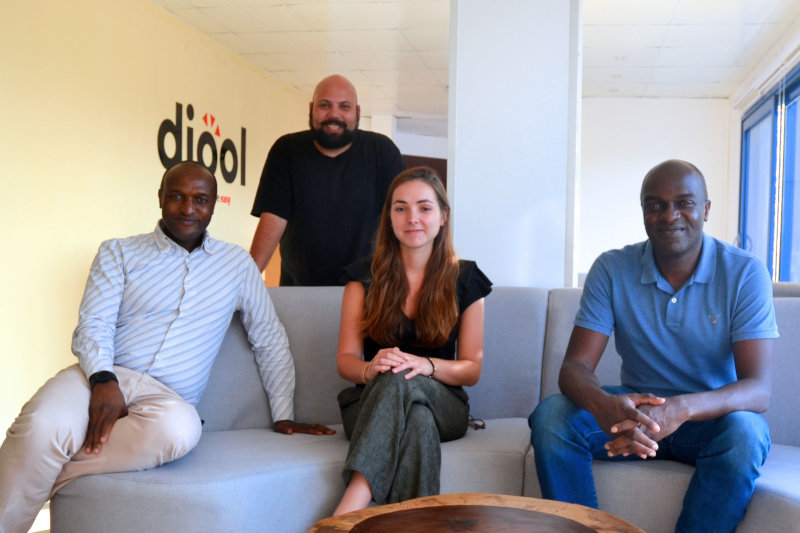 Some staff members at the start-up premises in Douala.

“Instead, the good method is to think and design solutions from the point of view of the local user, that is to say the merchant. Show him where there is a trouble, and how you will put an end to that trouble, and you will see that as conservative as he might be, he will welcome your product,” he explained.

Boupda believes that Africans are generally highly receptive to innovation – as long as the offering has relevance.

“Africa is the right place for innovation, no one should fear to propose innovation to Africans. They will embrace technology and innovation every time they see there is a benefit. The core problem is the usage for which you are proposing the product.”

Starting work in 2015, the core product app took several years to design – years that included several missteps before the final version of the app was ready. The lesson Boupda and the team at Diool learned: don’t rush into things.

“We took our time to build an architecture capable (of) supporting the service. We took time to ink partnership agreements with telecommunication companies, with partner financial institutions, we also took time to comply with the regulation. Only then you can go out with a marketable fintech solution and start to sell it,” he said.

Boupda said he doesn’t regret taking the risk of dropping a dependable job, regular income and comfortable life in Europe to return home and start a business from nearly scratch. He believes that if Africans don’t take the risks required to build their economies, no one else will, either.

“Let us say the truth, to build a business in Africa is particularly a difficult process but on the other hand, only we Africans can understand how things work here and how to make it. There are so many opportunities here in Africa and I think that those opportunities are made for us Africans.”

In 2021, the start-up received 2.5 million euros from a new investor, becoming one of the most funded fintech companies in Francophone Africa, an indication that Boupda’s efforts have met with initial success.

From their Douala-based headquarters, the Diool team is now looking to the future with great optimism, according to Boupda, as the company rolls out its service across Cameroon and West Africa.

Get real time updates directly on you device, subscribe now.

Ericson Mangoli is a researcher and a freelancer journalist, his work has been published by African Stand, Financial Stand, African Policy, and Kenyan Report.

Need for advancement of tech on payment systems for businesses

Fintech startup Pine Labs to seek $500 million in US IPO

Why you need to consider a CDP platform

Oil prices decline ahead of US interest rate decision

US approves $2.5 billion sale of radars and planes to Egypt

This website uses cookies to improve your experience. We'll assume you're ok with this, but you can opt-out if you wish. Accept Read More