Sony Group on Wednesday said that it expects operating profit for the full year ending in March to hit a record high of 1.2 trillion yen ($10.5 billion), a 26% jump over the previous year and beating its own earlier forecast.

Sales for the third quarter rose 13% from a year ago to 3.03 trillion yen, while operating profit jumped 32% to 465.2 billion yen, thanks to robust sales in its motion picture and music streaming businesses. In particular, the release of “Spider-Man: No way home” in December pushed up revenue for the third quarter, with global box office proceeds for the movie reaching a record $1.7 billion.

But Sony’s net profit fell 20% to 771 billion yen, as the effect of tax cuts in the previous fiscal year dissipated. This was despite a capital gain of 70 billion yen from the sale of mobile gaming subsidiary GSN Games. The company expects full-year net profit to fall 16.5% to 860 billion yen from a year ago, better than analyst expectations of 780 billion yen as compiled by data provider Refinitiv.

Sony has been able to boost sales during the COVID pandemic because of restructurings under former and current CEOs, Kazuo Hirai and Kenichiro Yoshida. Closing unpromising segments such as its Vaio laptops and curtailing its ambitions for the Xperia mobile phones allowed Sony to strengthen its financial position to make more strategic investments to compete. 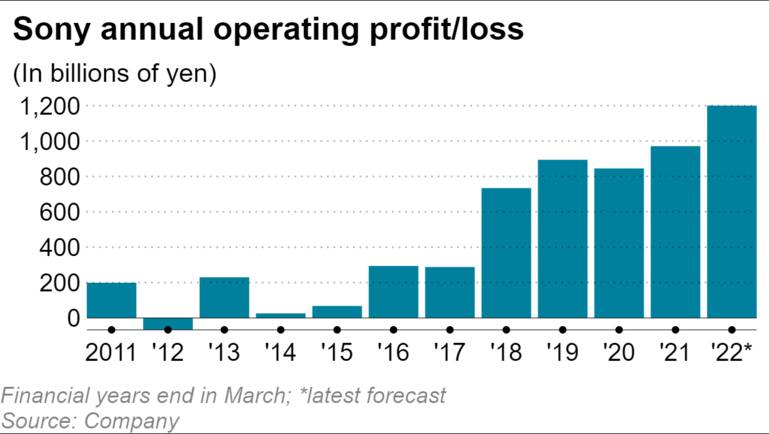 In its midterm management plan, Sony had said it aimed to pour 2 trillion yen into strategic investments through the fiscal year ending March 2024. Chief Financial Officer Hiroki Totoki said in a news conference on Wednesday that the conglomerate had already spent 850 billion yen, including on its latest investment in U.S. game maker Bungie.

“We are on the right track to evolve our business portfolio into one that enables us to achieve long-term growth,” Totoki said.

As part of its move to expand its businesses, Sony announced in January that it will set up a subsidiary called Sony Mobility Inc. to focus on electric vehicles. However, Totoki stressed that the company will not invest heavily in this field.

“We will not start making batteries or vehicles ourselves,” said Totoki. “We take a stance of ‘asset-light’ and will proceed with electric vehicle investment on the premise that we form partnerships.”

On the other hand, its mainstay gaming business, from which it gets nearly 30% of its revenue, is slowing as COVID-driven demand wanes and the ongoing chip shortage limits supplies of its PlayStation 5. From April to September, Sony sold 5.6 million PS5 sets, just 38% of its sales target for this fiscal year.

Totoki said Sony expects to sell 11.5 million units of PS5, fewer than the 14.8 million that it had previously forecast. 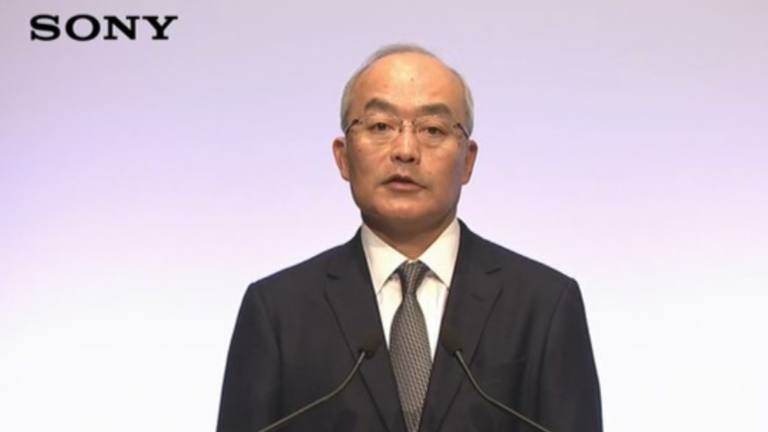 Competition in the gaming segment is intensifying as Sony and Microsoft snap up smaller rivals, hoping to gain an edge in the hunt for new customers. On Jan. 18, Microsoft announced plans to buy Activision Blizzard for $69 billion. The U.S. software developer is behind the hit game “World of Warcraft.”

That news sent Sony shares plummeting 13% the next day as investors worried that stiffer competition could weigh on its earnings.

Sony struck back on Monday by buying Bungie, the game maker behind both “Halo” and “Destiny,” for $3.6 billion. Totoki said the purchase will allow Sony to acquire Bungie’s knowledge and creative talent in live gaming while Bungie can explore opportunities to expand its offerings into to music and motion picture on Sony’s platforms.

Get real time updates directly on you device, subscribe now.

Cryptocurrency worth over $320 million stolen in Wormhole hack

Will Tesla continue to dominate the car industry or will it fail?

This website uses cookies to improve your experience. We'll assume you're ok with this, but you can opt-out if you wish. Accept Read More